Integrated Community Sustainability Plan
In 2010, the district embarked on a process and created an Integrated Community Sustainability Plan (ICSP) that Council approved in February 2012. ICSP Presentation.  Highlands’ ICSP espoused fundamental values and future visions regarding sustainability for the community.  Full Document.   It also created a looping feedback / monitoring system using indicators by which to measure the district’s progress of its own sustainability goals. To bring the values and vision of the ICSP to the forefront of district policy and decision-making, the Official Community Plan (OCP) needs to be brought into alignment with the ICSP.  Summary

Council resolved from the March 18, 2013 Council meeting that:


On September 9, 2013, Council sitting as Committee of the Whole received a presentation from the District Planner on the proposed changes to the Official Community Plan in or to align it with the Integrated Community Sustainability Plan.  Resulting from this meeting a Public Open House was scheduled for September 18, 2013 and recommendations were forwarded to the September 23, 2013 Council meeting.

On August 19, 2013, Council received a proposed amendment for alignment with Highlands' ICSP.


On March 18, 2013, Council received a proposed amendment for alignment with Highlands' ICSP.


Highlands Sustainability Group on Facebook
Facebook group has been formed for Highlanders to share ideas, experiences, and thoughts, with lots of how-to information. Topics include local food and water, bees, maintenance, farm animals, climate change, sustainable energy alternatives, native birds and plants, composting, art, music, biodiesel, gardening, kids, heritage, lake stewardship, invasive Species, and anything else related to sustainability. The group has also been used as a networking tool to arrange carpooling, hikes, work parties, crop trading and sharing, and social events. It may also prove useful in emergencies. The group is only available to Highlands residents and cannot be viewed by non-members. For more information, contact Ann Baird. 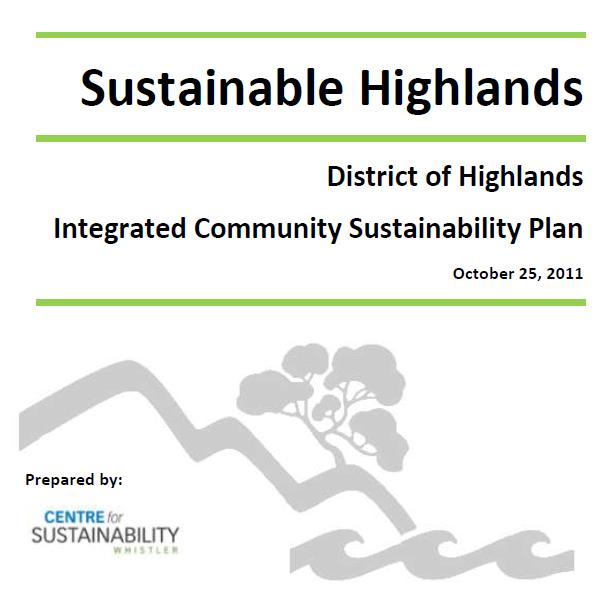